Enschede – The student team iFall from Delft University of Technology won the competition for additive manufacturing that was organized by SAMPE Benelux.

Student teams from the Benelux were invited by the organization SAMPE Benelux to participate in a competition in the field of additive manufacturing. Six teams from TU Delft (NL) and University Ghent (B)  participated and submitted their designs. The 3D-printed results were assessed on March 31 and tested in the test bench in the laboratory of Saxion’s ThermoPlastic composites Application Center (TPAC) in Enschede. The TU Delft team iFall was declared as the winner. 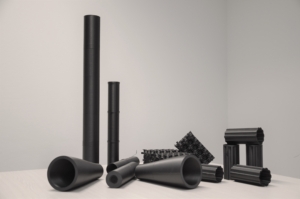 The participating designs. The winning tower iFall is the second from the left

It was all about the design of a rigid vertical shape, a column or tower. In the test bench, the tower was loaded perpendicularly with a continuously increasing compression force until the tower failed.

Eventually, the winning design was the tower of the team iFall from Delft. The team had a higher overall score because the design met the structural criteria in terms of aspect ratio, height as well as weight, although iFall’s design wasn’t the best in terms of compression failure force. The second and third prizes went to the teams Karamba and DASM, both also from TU Delft. 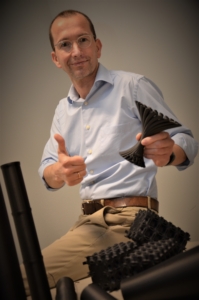 Jury member Ferrie van Hattum with the parts of the entries for the competition and the trophy for the winner. “It’s all about the combination of weight, height and strength.”

Jury member and technical director for TPAC, Ferrie van Hattum : “After all tests in our laboratory, the scores were determined using a formula. In fact, the higher the tower, the better it is for the score. With weight it works the other way around, so: the heavier the design is, the worse. It’s all about the combination of the results: winner iFall’s design was one of the lightest but they won points at height where other teams got penalties. It is nice to see that students are able to get the most out of material and construction within the set requirements. That is exactly what you want with lightweight structures.”

The iFall team consisted of students Huub Urselmann, Ranjan Gaur, Arshdeep Brar, Miguel Alonso Diaz and Palak Singh. They were happy with the results and with the teams performance. Besides they could take home a 3Dprinted award and a the € 400 prize money.

The Society for the advancement of material and process engineering (SAMPE) is a network of 180 professionals and students of Advanced Materials. Sampe Benelux is very active in composites and one of the important goals is to drive ‘technical excellence’ by exchanging knowledge and skills. To establish a dialogue between the engineers of tomorrow, the society this time took the initiative for a competition for additive manufacturing (AM). Student teams were invited to show their design skills. The teams were given five months to design and build it, and they had to use their knowledge and creativity to create a light, rigid vertical structure consisting of a number of parts. Students will expand their skills in additive manufacturing and technical design as, starting from concept, they worked through design calculations and structural optimization towards a digital model that was then printed at a partner company of Sampe. The printed version of the design was finally subjected to the test in the laboratory. The awards were given on the basis of the overall design that best met the stated goals for strength, deformation, weight and height. 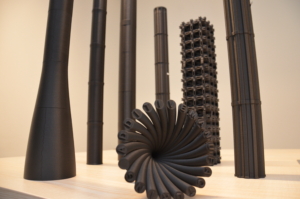 The entire test operation was performed by TPAC researchers Marco Del Vecchio and Ilse ten Bruggencate. Due to corona measures, all involved members of the teams and the judges were not actually present but connected online . The presentations and tests were also streamed live.

Requirements for the design

The participants had to design a rigid, vertical structure (pillar or tower) that would be tested to failure. The design had to meet various requirements, for example the pressure load was limited to 25 kN, the design had to be printed from Markforged’s Onyx One polymer, the tower could consist of multiple printed parts but glue was not allowed. The parts to be printed had to fit in a particular desktop printer and the teams had to maintain a ratio of at least 2: 1, so the height had to be at least twice the width and depth. The base of the tower had to fit on a plate of 130 mm diameter and the tower could not be higher than 750 mm.

The tower was not allowed to deform more than 20 percent of its original height when loaded; if it did, the maximum load was set at the point that the 20 percent deformation was reached. The columns had to be at least 50 mm high and able to support a minimum of 0.5 kN to be eligible for an award.