Enschede – Rivers full of floating plastic, huge piles of household plastic waste. We know the worrying images from the media. Is it possible to develop circular solutions in the east of the Netherlands to combat the worldwide surplus of waste from thin plastics and films? It almost sounds like an impossible task, but it is possible, says researcher Rik Voerman of the Lightweight Structures research group of Saxion University of Applied Sciences / ThermoPlastic composites Application Center (TPAC). “Decentralised recycling is the keyword. From agricultural plastics to household waste.”

With the Post-use Plastic Foil Solutions project that started last summer, Saxion’s TPAC is working with companies to optimise the separation, cleaning and reuse of thin plastics, from a technical and business point of view. There is a great societal urgency for this type of research, says Rik Voerman.

Rik Voerman: “About 45 percent of all household waste consists of thin-walled plastics and films. Much of the plastic waste from households has been wrapped around food such as cheese, fruit or rice. They are a big problem worldwide because they are more difficult to recycle than paper, metal and other plastics.”

This immediately entails a dilemma, because it is precisely the excellent barrier properties of the films, as Rik calls them, that also contribute to reducing the ecological footprint of growing, transporting and keeping food fresh: they weigh close to nothing. They also keep out bacteria and oxygen. “If you don’t wrap food in foil, the ecological footprint is up to 30 times greater, due to spoilage during transport.” But once the bananas – which grow in mega-bunches of agricultural plastics in the farms – have been harvested, when the apples are in the fruit bowl at home and the empty cheese packaging disappears into the waste bin, all that thin plastic is suddenly superfluous. And very difficult to recycle. Not to mention rivers full of sandwich bags and plastic packaging, the contents of which do not end up in the recycling process, but suffocate plants and animals. A thousand sandwich bags are equivalent in volume to a three-kilos plastic garden chair.

Heavily subsidised, because it is financially impossible

“In well-developed countries such as the Netherlands, most plastics go to large central factories, where they are washed, and then sorted again according to their type. Only then, it will be possible to convert them in reusable raw materials.” But the transport, washing and separation of the material makes it a very expensive and energy-intensive process, explains Rik. Moreover, it is heavily subsidised, because it is not financially feasible at all. “That’s how it works in prosperous countries like the Netherlands. You can imagine that things are very different in second and third world countries. With us, the plastic is already floating in the river IJssel. In Asian countries, the problem is even greater.”

Decentralisation is the keyword to achieve more efficient and affordable ways of recycling, which have a chance of success worldwide (also in the absence of government support or good central facilities). “You set up a recycling factory where many of the same types of waste streams are released. On a Peruvian banana plantation, the released agricultural plastic can be converted on-site into corner-boards to reinforce the pallets on which the bananas are transported. Along the Asian rivers full of plastics, it is possible to process the floating plastic into textile threads for weaving clothing. We are already testing this here in the east of the Netherlands with the floating plastic that we get from the river IJssel. What floats has already been cleaned to a large extent. Why would you drive trucks full of river plastic to a processing company in the province of Drenthe, if you can set up in-situ mini-factories decentralised? Clothing made from IJssel river-plastic can also have added value for certain groups of consumers.”

Over the next two years, Saxion’s TPAC will optimise three existing recycling initiatives based on the RAAK-funded, SME research project. Technically and in terms of the underlying business models, Rik explains. In addition to the recycling of agricultural plastics for bananas and the aforementioned river plastics, this is the recycling of household waste in the Dutch town of Almere. This material finds its way into facade panels and other building materials. An example of a recycled material house can be seen at the Floriade expo in April 2022 next year. “And that small-scale factory is already there in Almere, but we are looking for ways to make the processes better, smarter and cleaner.”

Rik Voerman:  Along the Asian rivers full of plastics, it is possible to process the floating plastic into textile threads for weaving clothing. We are already testing this here in the east of the Netherlands with the floating plastic that we get from the river IJssel.

The research should take these three initiatives further, explains Rik. “We run into all sorts of practical problems.” Which are those? “There is still a lot of dirty plastic in Almere. We push the boundaries of what is feasible to improve that process. If you look at banana plantations, the agricultural plastic in Peru and the Dominican Republic is relatively clean. In those countries it is possible to grow bananas without pesticides. If you want to apply such a concept to other countries where pesticides are used, you will have to investigate what you need to change to be able to recycle the plastics safely and cleanly.”

The aim is to have much more applicable knowledge in two years’ time, which can be used worldwide at local recycling factories. “At the moment they are still individual pilots. If we make the business cases healthier, making them interesting for everyone, we can make a huge impact worldwide. This decentralised approach has enormous potential, especially in second and third world countries. Due to the lack of central agreements, regulations and government support, these types of local recycling factories have a better chance of success. I personally strongly believe in that bottom-up approach. When we have a well-functioning concept, the repeat potential is infinite. For example, if we can control the pesticide problem in recycling, the banana sector worldwide can benefit from it.”

The Post-use Plastic Foil Solutions (PPF) project contributes to the objectives of the Green Deal, on the way to a fully European circular economy by 2050. Saxion has co-signed the Plastic Pacts drawn up for this purpose.

The project is co-financed by SIA (Dutch taskforce for Applied Research) within the RAAK-SME program. 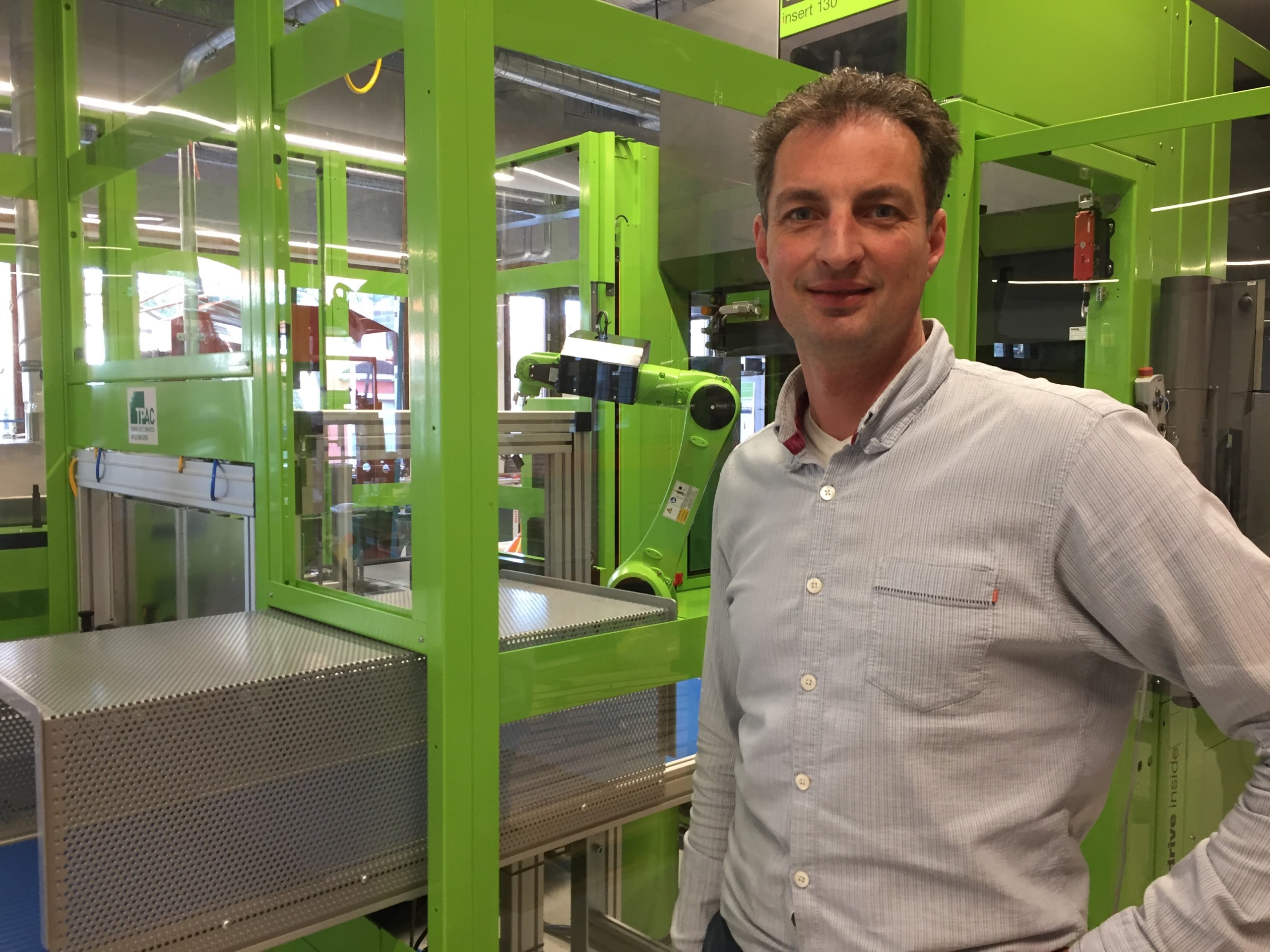 Ir. Rik Voerman studied Mechanical Engineering with a specialisation in Plastics Design at the University of Twente, Enschede, The Netherlands, where he graduated in 1996 in the field of residual stresses in short-fibre-reinforced thermoplastic composites. He supervised a large number of improvement and innovation projects in the plastics and composites industry and was manager of operational excellence at an engineering firm. In addition to his role as program manager, Rik has acted in an advisory capacity for innovation centers such as Dutch Polymer Institute – Value Centre, Polymer Science Park and Syntens. Since January 2014 he has been working at Saxion’s research group Lightweight Structures/ TPAC, where he has set up and supervised a large number of plastics recycling projects with the industry.